HMHS 118 - The Flake
Click above to hear two mean people pretending to be nice while talking about songwriting & hear how FamousPatrick is now even more famous.

Joshua McCormack - The Funeral of the Siren MySpace

Home Made Hit Show TV 012 - Dave King, He's a Cat
This time it's an amusing song from Dave King

Once again the show is on youtube but the embedded video below is from Revver with it's better stereophonic two channel audio :)

Find some Tomas sounds at MySpace

As usual the show is on youtube but the mid side segment really depends on stereo so I've also uploaded it to www.revver.com. The embedded link below is the Revver link.

Note that the spoken sound quality is a little lacking in places.

HMHS 116 - Open Mic at the Black Horse Pub
Thanks so much to John Poulton for putting this one together.

-----------------
The Open Mic Night takes place every other Thursday at The Black Horse on Gregson Lane. The next few Thursdays are the 15th and 29th of May and the 12th and 26th of June. It starts at 9.15 and finishes at 11.30. Other than there are no rules as such. Anyone is invited to bring along an instrument and play, solo or in small groups. If they wish to borrow a guitar there are several they can use. We set up two microphones and have a contact mic for the use of a fiddle player if required.

The age range of performers stretches from 12 to 65 (I don't ask ages!). Music ranges from metal (played) ascoustic to traditional folk. Many do covers but quite a few do their own material.

The acts with web sites either have CDs available (Trouble at Mill) or are planning to put one out (Mark Claydon) or would like to if they weren't so lazy (me). Pat (bass with Loz) is a member of band called the Rambling Riversiders and they play in the States regularly; I think Pat is playing in Nashville as I type. Rob and Susie's is done and they are awaiting delivery (exciting). Colin is in a band but I don't know much about them. These lofty ambitions do not tarnish the evening which is strictly fun, and for most rather boozy!

HMHS 115 - If You Wanna Say It Then Just Say It
Another, hopefully, great show for you this week.

Here's the books I talked about.

HMHS TV 009 - Dave's Got A Pod In His Pocket
This time we have a short overview by Dave of his new Pocket Pod. No sounds but you get to see the unit and hear Dave repeatedly refer to the POD 2.0 as the Toneport 2.0

Watch with the following options 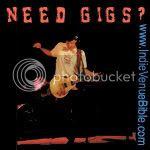